Sallie and Steve exchanged yearly family Christmas cards after Steve helped Sallie’s family with legal matters.  They developed a friendship over the years.  Steve was suffering from progressive cancer.  Over the course of 12 years, Sallie could read his decline in each of the yearly Christmas letters included in Steve’s card. 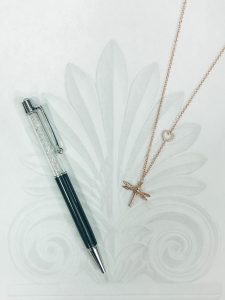 In late July 2020, over the course of 4 days, a red dragonfly appeared in Sallie’s backyard each time she went out.  Never having seen a red dragonfly before, she went online to find if there was a special significance to the red dragonfly and found that it represented death and transformation.  Then one morning in August, Sallie awoke from a dream.  In the dream, she had received a card from Steve.  In the dream, she knew he sent her the card to let her know that he had passed.  As she started to open the card, a necklace fell out.  It was a gold dragonfly on a gold chain.  Up the chain by 4-5 links was a small heart outlined with diamonds.  The act of grabbing for the necklace to keep it from falling woke Sallie up and she did not have a chance to see what the card said. 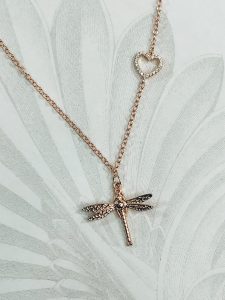 Later that morning, still thinking about the dream, Sallie was sure that Steve was gone and that he had let her know.  On a hunch, she went online to the obituaries of the county in which Steve lived.  Sallie was right.  She found Steve’s obituary from 3 days prior.

Sallie wanted the dream necklace designed as a tribute to Steve and his courage during a very long battle to live for the sake of his family.  She wanted to pay homage to the “Christmas card friendship” they shared for over 12 years.  Lastly, this was a gift from Steve to Sallie, sent in a dream and now a reality in Sallie’s life.

We are honored to be a small part of this story.  Thank you Sallie for sharing it with us.