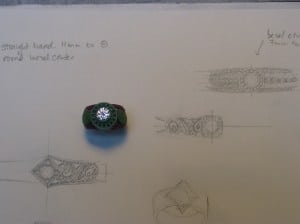 This project started out early last summer, as a way to celebrate a significant anniversary. Like many women, the original wedding ring still holds emotional significance, so it was important to include her diamond into the ring as the centerpiece. My design criteria: very wide band, modern design lines, add some glitter – but not too much, and have the option of more than one color of metal.  Late November I hit on the right idea, and the ring really started to take shape.  The first photo shows the ring in the wax stage with a few design doodles.  We took the center section of the upper right sketch, the acanthus floral pattern in the left sketch, and combined with a straight band.  I wanted to incorporate some open space because of the width of the ring, and as my client hoped to have a subtle floral design worked into the ring, using a historic floral pattern really brings it together.  The second photo shows the pattern better. To make the pattern precise, the first acanthus was carved free-hand, and a mold was then made to replicate it four times. We opted to taper the band but not alter the acanthus pattern, so the curve goes into the band – which provides a natural end to the diamonds that will be set on the edges. The acanthus section will also have diamonds set into the yellow gold, using a traditional bright-setting method.  The last photo is of the largest size of ideal-cut diamond melee that we are using – if you look at the calipers, you can see these are just 1.5mm in diameter.  We will also be setting 1.25mm and 1.0mm throughout the ring. Today, the ring begins its transformation from wax into gold, through the traditional lost-wax casting method.  Unlike the viking helmet project, this will be cast using centrifical force and a torch to melt the gold.  Because the ring will be both white and yellow gold, there are two molds and two casting sequences. 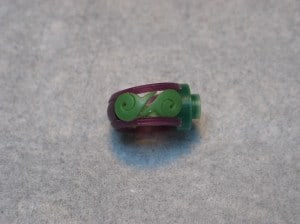 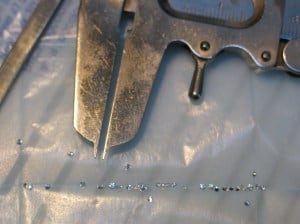