We have a wide variety of new pearl necklaces and earrings in store so we thought it might be a good time to share some information about the beautiful and timeless pearl. We carry Cultured Freshwater, Akoya, and Tahitian pearls in a variety of colors and sizes. Let’s learn about where they come from, the colors you can expect, and the factors that impact pricing. 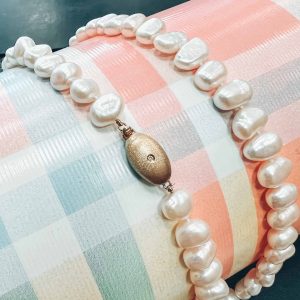 Fresh water pearls from China make up more than 90% of today’s pearl market, and have never been so widely accessible. Freshwater pearl cultivating operations began in JAPAN in the 1920’s but died out in the 1980’s due to polluted waters. China’s freshwater pearl production began in the 1970’s although China had been creating mabe pearls for centuries. For the most part Chinese fresh water pearls are grown by using an implantation of mantle tissue and often dozens of pearls are harvested from the same shell.  These pearls are the closest in pearl composition that you can get to a natural pearl formed on its own in the wild. The natural colors can vary wildly depending on the shell they are harvested from. Common colors are white, cream, and golden, but you also will see pink, lavender and sometimes soft blue. 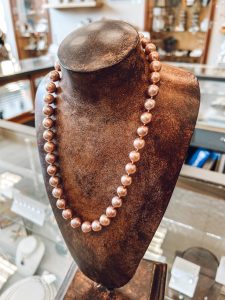 Freshwater pearls are extremely durable, and if cared for properly, will retain the original color, luster and orient for decades to come. Freshwater pearl luster will feature a softer, more subtle glow than that of their saltwater cousins due to the way in which light reflects and refracts off the various layers of crystal. Freshwater pearls have a larger variety of shapes, the most common and distinctive of them being either potato shapes, or off-round / oval shapes. The higher-up in quality these pearls get, the rounder the pearl shapes will be.

Cultured Akoya pearls are known for being perfectly round. Baroque Akoya are of course available, but they’re rare, and more of a collector’s item at this point in time. While the akoya pearl is considered to be (overall) more rare and valuable than the freshwater pearl, it is only the third most valuable commercially produced pearl, falling behind South Sea and Tahitians. The vast majority of the world’s akoya pearls are produced in Japan. China was once a genuine contender, but mother nature all but destroyed the Chinese akoya industry in 2007. Most pearls are white to grey, with pink, green, or silver overtones. Occasionally, akoya pearls are blue with silver and pink overtones, but these colors are extremely rare.

These saltwater pearls come from oysters inhabiting the oceans of the world. Pearl farmers place a small bead, called the nucleus, inside each oyster to stimulate the production of nacre. Over several years, the lustrous nacre builds up to form a perfectly round, smooth Akoya pearl with overtones ranging from silver to rose. Their incredibly high luster gives a mirror-like effect, making Akoya pearls a favorite for the ages

There are a couple of reasons for the pricing disparity when it comes to Freshwater versus Akoya pearl types. These are:

Although Tahitian pearls carry the name of the famous Tahiti Island they do not come from Tahiti. These pearls are produced by the Pinctada Margaritifera oyster, commonly called the Black Lip oyster. Black-lip pearls are farmed in French Polynesia, the Cook Islands, the Micronesian Islands, and even to some extent, Japan, Thailand, and the Philippines, but only those grown in French Polynesia may be called Tahitian pearls. Tahitian pearls consist of hundreds of overtones with incredibly exotic colors such as peacock green, silver green, blue, and eggplant, just to name a few. Less than 10% of harvested pearls are round, making Tahitian Pearls some of the most sought-after gems in the world. 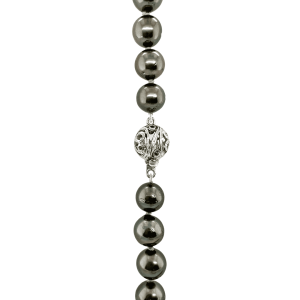 Tahitian pearls were once the rarest, most valuable cultured pearls in the world. These are very sensitive oysters, which makes their culturing process a hit and miss. As a result, Tahitian Pearls are rare and expensive to produce . When a tiny bead is placed in the black lip pearl oyster with surgical precision, it forms a pearl sac which then “coats” the nucleus with crystalline nacre layers to form the beautiful Tahitian Pearl as we know it. They are still much more valuable than freshwater and akoya pearls, but the farming enterprises are no longer relegated to small groups of atolls. This has brought market forces into play, and today, Tahitian pearls are now affordable to a much wider demographic. 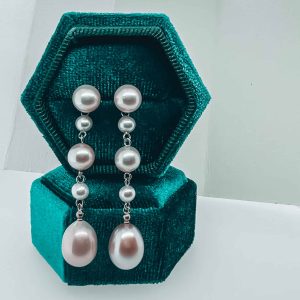 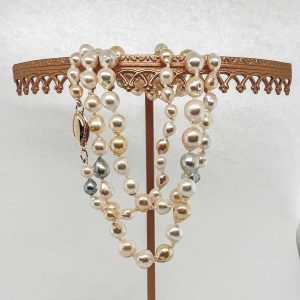 Pearls will always be a classic jewelry piece that elevates any outfit. They can be worn for special occasions such as a wedding, or in your every day life with dressy and casual outfits. It is a jewelry investment that is well worth it – we think so anyway. Leave a comment below if you have any questions. Come visit the store to see our selection.